Advertise or Host A Radio Stream or Link from Only R20 per month!

Listen to our Featured Radio Station for the Month on your favourite device at 128Kbps on:

Send "Home" or "Car" or "Life" or "Funeral" or "MVA" and your Full Name, Age and Cell No. to: [email protected] or just go to www.MedSure.co.za, fill in the relevant form and we'll call you. 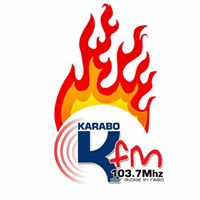 KARABO FM is a Radio Station based in the outskirts of the Free State and Vaal River.

“YOUR CHOICE IN RADIO”

Karabo youth development organization is a three dimensional company based in Sasolburg which is also registered as a non-profit making organization. These three divisions of Karabo are community radio station (Karabofm), community magazine (Karabo magazine) and the youth advisory centre. We envisage accommodating these three divisions of Karabo in one roof.

Karabofm was on air using thirty (30) days event license but ICASA granted Karabo a four year radio broadcasting license in 2009, this license expired during the year 2013 and has now been renewed to 5 years. The station started to operate as soon as SENTECH installed a transmitter and a frequency of 103.7 MHz. The station operated from the year 2009 until 2013, On Saturday 7th September 2013 two armed men entered our premises and held one of our employees and a security guard hostage, following this they poured petrol all over our premises and set it alight. Fortunate enough everyone escaped unharmed. A case of arson was opened with the case number 122/09/2013. This case is still under investigations. The station was off air for a period of 14 months as a result of key stakeholders that were involved, part of the challenges we experienced was the protest march that happened at Sentech (signal distribution) in the same time frame.

To add your Radio Station, or radio Stream, or advertise on our network and discuss how you can use it to promote your business or media, please Contact Us here.